The least we can say is that the movements on the foreign exchange markets have been a topic of discussion in recent days. The subject has been widely discussed at the World Economic Forum in Davos but also at the ECB Governing council.

US statements that sow confusion. In Davos, the Treasury Secretary Steven Mnuchin and the Trade Secretary Wilbur Ross adopted an offensive communication on the trade policies of other countries, fueling the theme of the trade war. Mnuchin further stated that a weak dollar was in the interest of the US economy. The next day, President Trump retracted his remarks and said he wanted to see the dollar stronger "ultimately" because that would be a sign of the strength of the US economy. Overall, these statements have clouded the US government's intentions on several topics including the dollar.

The markets were disappointed by Mario Draghi's reaction to the appreciation of the euro against the dollar. Contrary to the expectations of some, Mario Draghi did not provide a firm response to the exchange rate movements and simply indicated that “the recent volatility in the exchange rate represents a source of uncertainty which requires monitoring with regard to its possible implications for the medium-term outlook for price stability ». The lack of a strong response from the ECB on this issue is not surprising. Indeed, the effective exchange rate of the euro has risen only slightly since the beginning of the year: it is only up by 0.6%. In contrast, the euro is up 4.1% against the dollar over the period (the chart below shows the evolution of currencies vs USD: only the Philippine peso has depreciated vs the USD year-to-date whereas a significant group of currencies have appreciated vs the euro). So it's much more a shock on the dollar than a shock on the euro that we are witnessing.

The depreciation of the US dollar is all the more disconcerting as long rates have risen in the US more than in the other developed countries since November. But one should also remind that the dollar had depreciated continuously during the 2004-2006 fed funds tightening cycle as global growth was strong, as the other developed economies were catching up with the US and as commodity prices were booming. Several other elements can partly explain the USD depreciation:

But even some of these themes are here to stay and that we forecast a modest trade-weighted depreciation for the USD this year, the current pace of USD depreciation seems exaggerated and this should lead to some corrections. 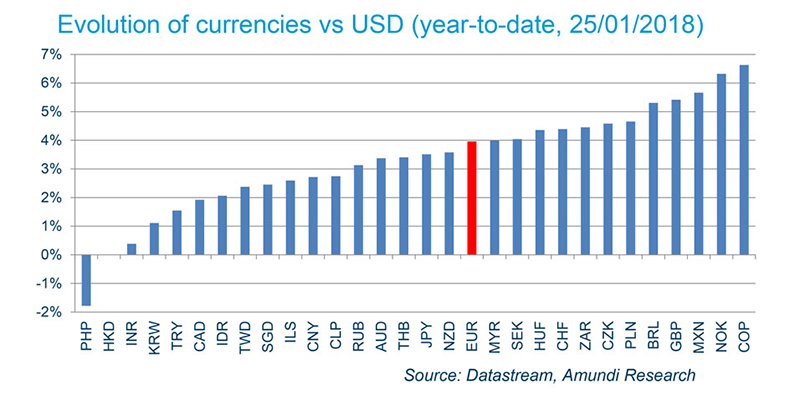 DRUT Bastien , Senior Strategist at CPR AM
Send by e-mail
Strong Euro or weak dollar?
Was this article helpful?YES
Thank you for your participation.
0 user(s) have answered Yes.
Related articles 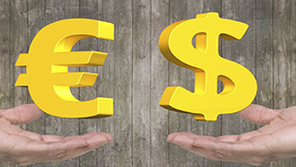 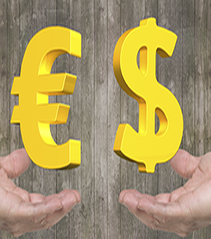 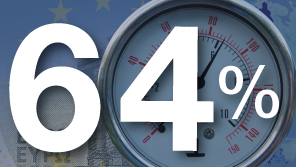 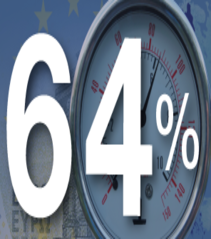 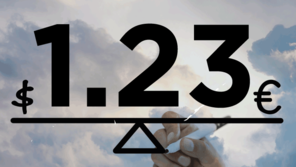 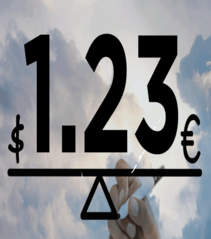 The EUR/USD parity has briefly hit 1.23 on Wednesday, for the first time since December 2014.