French Presidential Election - French economy recovery: where are we? 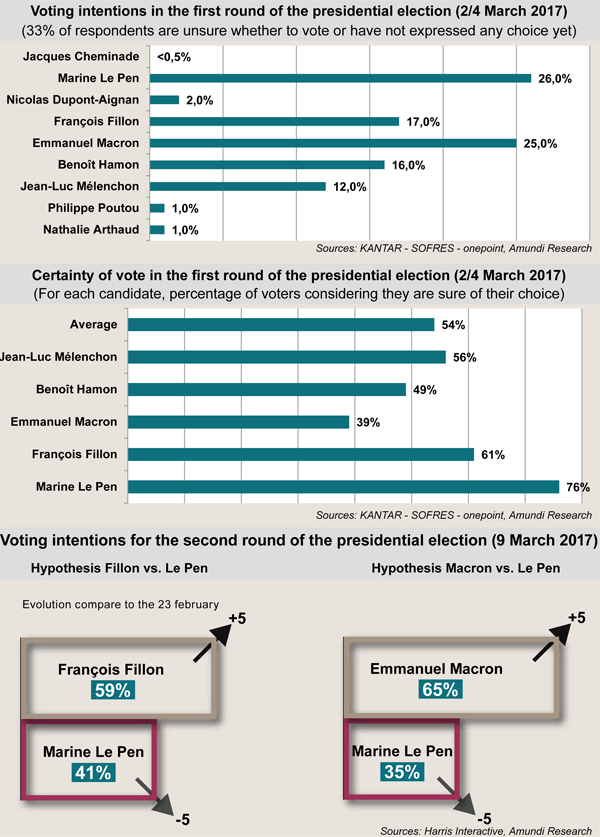 The French economy was less negatively impacted than many others by the economic and financial jolts of the 2008-2013 period, but its performance has been lacklustre since then – neither the Eurozone’s engine nor its “sick man”. Much the same can be said of the major French macroeconomic imbalances, which are undeniable but still bearable for the time being. French economic policy since 2012 has been marked by a steady approach to deficit-reduction and the launching of reforms in several areas, which are paying off, but only very gradually.

France generates about 2.3% of global GDP* (with just under 1% of the world’s population) and 21% of the euro zone’s GDP. Based on many long-term performance metrics and competitiveness indicators, the country ranks generally average among developed economies. However, it suffers recurrently from an unfavourable comparison with its main partner, Germany, in many areas, starting with the unemployment rate, the share of industry in the economy, public debt, public deficit and foreign trade (still, the contrast in GDP growth is not as stark and depends on the period reviewed). 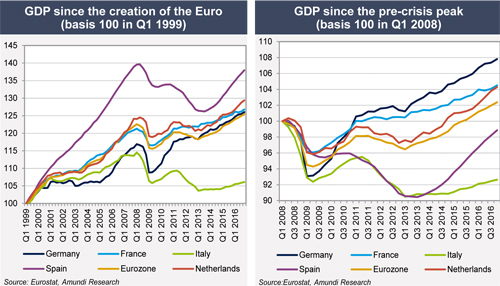 The economy’s disappointing trajectory in recent years has tended to widen this gap even more.

The French economy did hold up well during the 2007-2008 recession, protected by its traditional shock-absorbers (household consumption and public spending), a solid banking system, and its lower
exposure to international trade than Germany. It then suffered through a second recession during the 2011-2013 Eurozone sovereign debt crisis, but without a collapse comparable to those seen in Italy
and Spain, and without having investors raising too many eyebrows at its public debt (safe for a brief period at the end of 2011).

Since 2013, French real GDP growth has moved back into positive territory but has stalled at barely more than 1% annually, below the Eurozone average. A weaker recovery than in Spain or the Netherlands may be due to the lack of pent-up demand because of a shallower previous decline, but this cannot be the reason for its gap with Germany over the same period (during which German GDP expanded by 1.6% on annual average).

While GDP has not accelerated, some notable improvements have nonetheless been seen over the past few quarters: 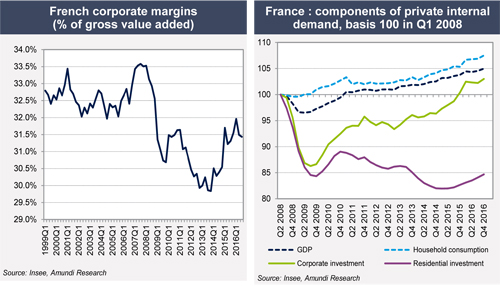 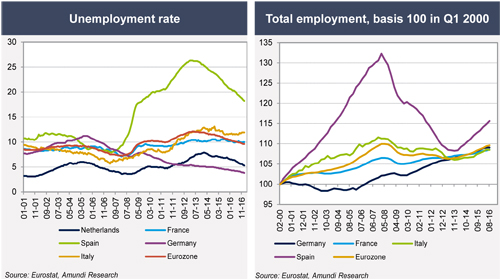 Looking at the most recent figures, we see that, after a relatively solid Q4 2016 GDP growth (+0.4% vs. Q3), the initial business climate indicators for early 2017 are sending out a very optimistic message. This is the case, notably, for PMI Indices, the INSEE’s business confidence indicators and the OECD’s leading indicators (the latter were higher for France, as of January 2017, than for other major developed economies). However, the importance of those short term signals must not be exaggerated, all the more so that several government measures (payroll tax cuts, support for construction, and tax cuts for certain households) have been calibrated to provide their full impact in 2016 and 2017, an impact that may not recur with equal intensity from 2018 on. A far greater and lasting improvement is needed to both truly begin catching up with Germany and decisively remedy the French economy’s major macroeconomic imbalances.

III – Twin deficits**and debt: sustainable... for the time being

France’s public deficit is still slightly above the European threshold of 3% of GDP (at an estimated 3.3% in 2016), but has shrunk steadily in recent years (since setting a record at 7.2% of GDP in 2009), as market leniency has allowed the country to opt for a far more gradual approach than the drastic austerity imposed on its southern European neighbours. This improvement is due partly to the economy and partly to falling interest rates. However, the cyclically adjusted primary deficit, which reflects structural adjustments, has still shrunk from 3.4% to 0.9% of GDP since 2009. The level of public debt, meanwhile, at nearly 100% of GDP (up from 64% in 2007) is slightly above the Eurozone’s average and far higher than Germany’s. However, it has stabilized in recent years. 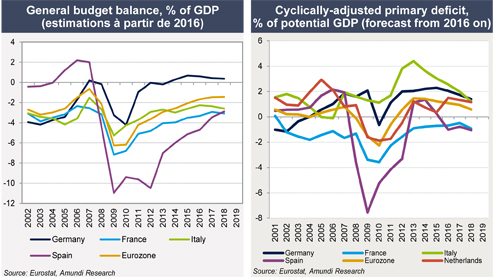 France also has a recurring current account deficit; although not a very large one (roughly 1% of GDP in 2014, according to Insee, its reduction to well below this level in 2015 and 2016 being due essentially to the lower oil bill). Its most problematic component is the balance in goods and services deficit, which reflects insufficient external competitiveness. While all other major Eurozone countries have a current account surplus, France is therefore alone in showing twin deficits Private debt is not excessive but is growing. In contrast to Italy and, even more so, Spain, it has continued to rise in recent years in France. Corporate debt, the growth of which is due more to weak margins than to investment, is now rather high compared to France’s large neighbouring countries (at about 130% of GDP). However, it is not raising any major flags at this point. Household debt (57% of GDP) is also on an upward trajectory, but is still far lower than just before the 2009 crisis in countries that were later hit hard by serious mortgage debt crises. 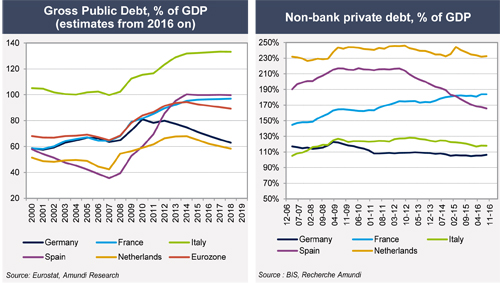 For the moment, these imbalances are sustainable, even in an environment of slow growth. But both public and private debt would be heavy sources of vulnerability in the event of a new recession or a sharp rise in interest rates without an acceleration in growth.

Faced with a still-high public deficit and an unemployment rate that had been rising since the serious crisis of the late 2000s, the administration that took office in 2012 put through a policy whose main directions have been the following:

However, these reforms (some of which were pushed by Emmanuel Macron, who served as advisor to the president and then minister of the economy) have met with fierce resistance, forcing the government on several occasions to lower the bar (particularly in easing the conditions of layoffs, the opening up of some professions to competition, and the reduction of municipalities’ prerogatives).

The unpopularity of some reforms (in addition to the tax hikes), the fact that they were counter to campaign promises, and the fact that this type of reforms generally takes time to pay off are among the main reasons for President François Hollande’s lack of popularity, that led him to decide not to run for re-election.

As 2017 begins, the current phase of political uncertainty is therefore unfolding in the midst of an economy that, while still growing at a disappointing pace, has nonetheless improved in recent quarters and should continue to improve in the coming months. Although the effects of some short term policy measures could lose strength in 2018, and while the measures implemented by the future government (especially the fiscal stance) could affect the detailed growth outlook, the positive trend is also supported by important cyclical factors (employment and investment) and some of the gains of the reforms undertaken in recent years are probably yet to come. The main risks to a further recovery do not reside today in domestic economic factors, but in political shocks that could jeopardize the continuity of Eurozone institutions, whether originating from France or from other Eurozone countries, or in external events that could undermine the current cycle of expansion in the global economy. 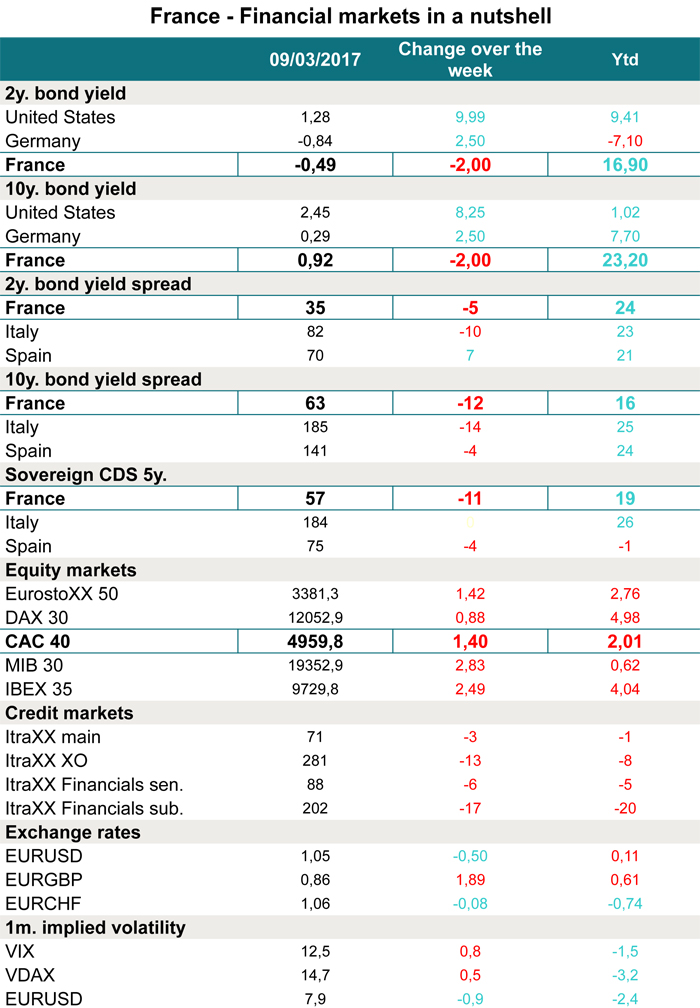 * IMF estimate according to its purchasing power parity methodology.
** A country is said to be running twin deficits if it has a public deficit (its public agencies spend more than they collect in taxes and other revenues) and a deficit in its trade with the rest of the world. Economic theory suggests that there is a link between these two deficits.

PERRIER Tristan , Senior Economist
Send by e-mail
French Presidential Election - French economy recovery: where are we?
Was this article helpful?YES
Thank you for your participation.
0 user(s) have answered Yes.
Related articles 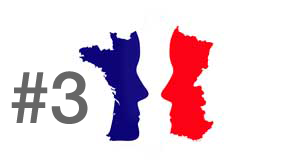 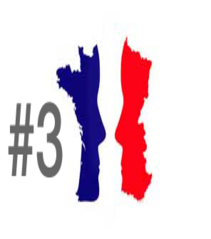 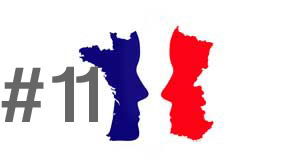 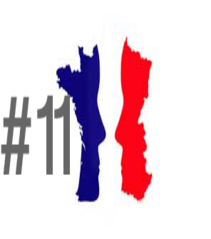 Over the last few years, France has carried out fewer spectacular reforms, than (in turn) its three larger eurozone partners (Germany, Spain and Italy). The OECD has nevertheless recently highlighted significant achievements in the areas of the labour market, education, competition and the reduction in the cost of labour. 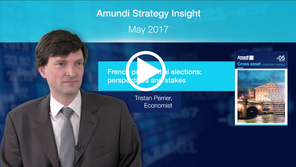 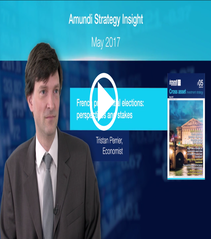