Over the last few years, France has carried out fewer spectacular economic reforms than its three larger eurozone partners (if we only consider here measures such as those recommended by the OECD and European Commission, generally considered as favourable to competition and the market economy). Confronted in turn with major difficulties, Germany (during the 2000 decade) and then Spain (especially in 2012) and, to a lesser extent, Italy (especially in 2014) have made significant efforts, targeting in particular the labour market and crowned (at least in the case of the first two countries) by undeniable success in reducing the unemployment rate.

In France, where the economic situation was better than Germany's at the beginning of the 2000s, and less disastrous than that of Spain and Italy during the 2011-2012 sovereign debt crisis, successive governments were neither forced nor did they wish to take such unpopular and politically risky measures.

More gradual reforms were nevertheless carried out, particularly over the last few years. These efforts, now recognised by international organisations, are expected to be continued if the new French President obtains the parliamentary support needed to implement his programme, following the legislative elections in June 2017.

I. The pace of reforms has accelerated in France over the last two years

In a previous note, we reiterated the three main categories of structural obstacle in the French economy identified by the majority of studies on this subject:

Since then, the 2017 edition of the OECD's "Going for Growth" report has been published. Every year, the OECD assesses the reforms implemented by each country to remedy their structural obstacles and updates its recommendations.

Interestingly, France is classified favourably in this report for the reforms carried out during the period 2015-16, with regard to three aspects:

1. The intensity of the reforms fulfilling the OECD's recommendations (only decisions actually translated into laws are taken into account, to the exclusion of decisions only announced).

2. The fact that reforms accelerated in France in 2015-2016 whereas they tended to decelerate in the majority of other countries compared with the period 2013-2014 (however, some countries have extenuating circumstances related to difficulties in implementing the major changes made in 2013-2014).

The chart below shows this good ranking (Austria and Belgium, within the eurozone, being in a comparable position).

3. The fact that the efforts are deemed to be relatively balanced, addressing both the labour market and the goods and services market (see chart below). The OECD's studies regalarly endeavour to demonstrate the attraction of synergies between reforms carried out simultaneously in different areas, which are therefore likely to achieve better results than those that could be obtained from the same reforms considered separately.

Improvement in the equity and quality of the education system.

The OECD notes the creation of a personal training account and the strengthening of systems for the orientation and control of professional training. The lower-secondary school reform (autonomy of establishments with support for working in small groups) is also mentioned.

Reduction in regulatory barriers to competition.

The OECD welcomes the liberalisation of energy tariffs for large companies, the extension of opening hours for some stores, the opening of passenger coach services to competition and the relaxation of regulations for entry to some professions.

Reduction of taxation on labour.

The OECD highlights in particular the reduction of social security contributions following the implementation of the "CICE" and "Responsibility Pact" mechanisms, which have been effective primarily since 2015.

The OECD encourages France to continue the efforts in these four areas over the next few years. In particular, it recommends:

Finally, in 2017, the OECD has added a new area of reform deemed to be a priority for France: reducing excess coverage in wage agreements and streamlining employee representation. In this respect, the OECD recommends reducing the administrative extension of collective agreements, reviewing the financing of trade unions so that it is based more on the contributions of their  members and continuing to streamline employee representation in large companies.

Overall, these recommendations have many similarities with those of the European Commission (summarised in the inset below), which do not grant the same degree of priority, however, to the reform of employee representation.

Some key measures of Emmanuel Macron's programme clearly fulfil the essential aspects of these recommendations:

The implementation of these measures, closely in keeping with the recommendations of international organisations, could increase the confidence of the markets, whose opinion leaders (analysts, rating agencies, think tanks, financial press) generally share the views of these organisations. It could also help improve the functioning of the Franco-German partnership, since the confidence of Germany requires that France, in addition to keeping its budgetary commitments, demonstrates that it is capable of overcoming the reluctance to "procompetition" changes of a large part of its public opinion and organised professions.

However, the implementation of this programme is unlikely to give an immediate boost to growth.

Potentially very positive in the long term, these structural reforms will probably not create an immediate growth shock. The labour market measures, in particular, actually sometimes tend to create a negative "J curve" effect for employment and activity for a few quarters before generating gains. Moreover, they are not accompanied by a major fiscal stimulus since, as from 2018, Emmanuel Macron intends to make new public spending savings which will only partially be allocated to tax cuts (he also intends to roll out an investment plan but, ultimately, the deficit needs to continue declining each year). Admittedly, positive confidence effects could play a role but, ultimately, we do not expect growth to much exceed 1.5% during the first few years of his term of office (our current forecast is 1.4% for 2017, 1.3% for 2018).

In any event, in order to be able to implement his programme, the new President still needs to have, after the legislative elections on June 11 and 18, the parliamentary support needed to form a government majority (a majority that could be based on an alliance with left-wing and right-wing members of parliament sharing most of the options of the presidential programme). For the moment, the polls are favourable to Emmanuel Macron, but victory is not a done deal. Without a success at the legislative election, the French-style "flexi-security" advocated by the new President (liberalisation of competition mechanisms in all markets, but without a massive decline in the volume of social protection and mandatory contributions) will still have to wait. Even with a success at the legislative election, though, the President’s task will not be easy as many of his promises are likely to clash with numerous significant organised interests both on the Left and the Right. 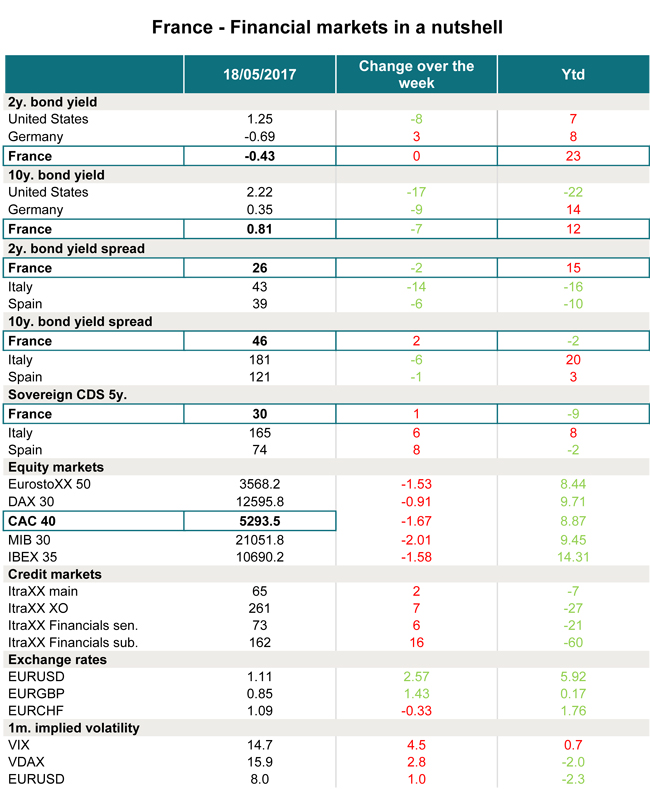